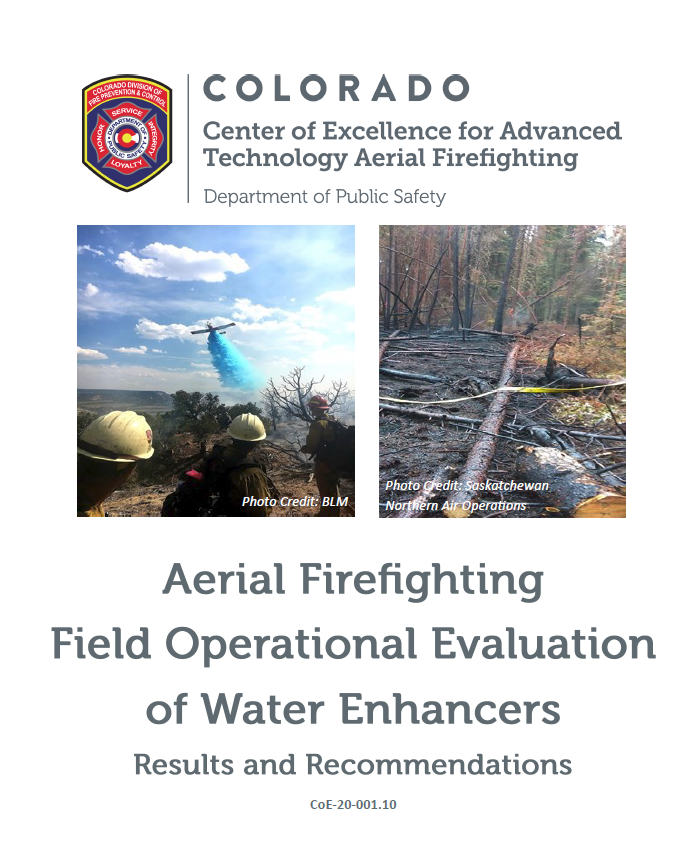 The CoE is happy to present the final report of our 3-year Aerial Application of Water Enhancer study.  Please feel free to share this and to contact Aviation Project Manager This email address is being protected from spambots. You need JavaScript enabled to view it. with comments or questions.  The report suggests a number of follow-up actions that the CoE will consider.  We want to share our thanks for all those agencies and partners who assisted with this report over the last 3 years.  Read the full report here.

The following is an excerpt of fromthe report.

The Center of Excellence for Advanced Technology Aerial Firefighting (CoE), with support from the Colorado Division of Fire Prevention and Control (DFPC’s) Aviation Unit and the Bureau of Land Management (BLM), conducted a study during the 2017–2019 wildland fire seasons to evaluate the effectiveness of water enhancers on wildfires by using single engine air tankers (SEATs) to test three products.

This report documents the results of the CoE study as well as key observations and recommendations for the effective use of water enhancers.

The most common firefighting agents used in aerial firefighting in the United States are water and long-term retardant (LTR). Prior to this study, Colorado loaded only LTR in SEATs. LTRs are chemical concentrates mixed with water that alter fuels so that they do not support combustion.

Water enhancers are polymer products added to water to improve its fire-suppression characteristics. Plain water dropped from aircraft without the addition of water enhancers is actually a very inefficient suppressant. When it converts to steam, it has a great capacity to absorb and carry away heat. However, it also has a strong surface tension that causes it to bead up and roll off most fuels before it can absorb its full heat capacity. In essence, much of the water runs off the fuel. Typically, the terms polymer and elastomer are used to refer to firefighting gels—we use the term polymers to describe "super-absorbent polymers.” The cross-linking process allows them to absorb and retain a very large amount of water and builds viscosity and thickening without altering the other properties of the water.

The term elastomers is used to describe polymers that impart what is called “viscoelasticity,” or viscosity and elasticity together. This consistency is typically called rubbery; because they are lightly cross-linked they do not absorb as much water when mixed. In addition to building viscosity, they also add the elasticity so are referred to as elastomers.   Read the full report here.

Water enhancers (commonly referred to as gels) have been limited in their operational use in recent years. As such, their effectiveness has not been thoroughly evaluated through field testing. Consequently, wildland fire agencies in Colorado do not have access to information about the availability, use, and effectiveness of water enhancers. The Center of Excellence for Advanced Technology Aerial Firefighting (CoE), with support from the Division of Fire Prevention and Control’s (DFPC’s) Aviation Unit and the Bureau of Land Management (BLM), is continuing the study during the 2019 wildland fire season to evaluate the effectiveness of water enhancers on wildfires by using single engine air tankers (SEATs) to test three products.

Water enhancers are polymer products added to water to improve fire‑suppression characteristics. The products contain thickeners that improve aerial application performance by minimizing drift and evaporation and increasing adherence to fuels. These products are also known as gels because they form gel-like slurry when mixed with water. While they have been used for aerial suppression in parts of the United States and Australia during recent fire seasons, the majority of previous research investigating the suppressants has focused on direct application in protecting exposed flammable surfaces in the form of structures and wood piles.These studies have used a variety of techniques to investigate how suppressants can extinguish non-spreading (i.e., static) fires or prevent/delay the ignition of flammable surfaces exposed to heat sources. There have been several studies that have been conducted on direct ground-based application in vegetative fuels for the suppression of spreading fires. These studies were limited in their size and repeatability and provided more of a demonstration of a method, rather than a comparison of suppressants or techniques.

Objectives of the Study

Outcome of the Study

After the completion of the study, the CoE—with assistance from the participants—will produce a report on the outcome of the study and share it with the aerial firefighting community. The report could include the following:

Discussion of Products and Test Plan

Prior to this study, Colorado loaded only long-term retardant (LTR) in SEATs. LTRs are chemical concentrates mixed with water that alter fuels so that they do not support combustion. Retardant is dropped adjacent to or ahead of the fire to create a chemically induced fire break at its perimeter. This deprives the fire of fuel, thus retarding the fire’s spread. After the water in the mixture evaporates, residual chemical on fuels continues to reduce the fire’s ability to generate heat, which is particularly useful in fighting high-intensity fires with a distant and indirect attack. LTR is most commonly used because of its long-lasting effect on fires.

Water enhancers are available as wet or dry concentrates. They contain polymers or other thickeners that aid plain water in its adherence to fuels, allow buildup of a thick and protective wet layer, and minimize the effects of wind drift during aerial application. Water enhancers modify fire behavior or extinguish fires by absorbing the energy (i.e., heat) being released by the fire because they have increased film thickness. In other words, their molecular bonds slow water evaporation by creating a thermal protective coating. Unlike LTR, water enhancers are mainly dropped directly on the fire (direct attack) to supress or halt the fire long enough for ground resources to access the fireline and mop up or supplement the knockdown process. If ground resources cannot access the fire edge due to terrain or other access issues, the fire may rekindle over time.

In this study, the CoE will evaluate the use and effectiveness of three water enhancers: FireIce 561® (uncolored and/or blue colorant), BlazeTamer 380® (uncolored), and Thermo-Gel 200L® (blue colorant). All of these products are approved by the U.S. Forest Service (USFS) for use in SEATs.[1]

FireIce 561® is a highly refined, cross-lined polyacrylate copolymer. FireIce 561® is a dry powder that weighs approximately 8.45 pounds (lbs) per gallon when mixed with water. The mixing ratio is between 0.12 and 0.18 lb of powder per gallon of water. The colorants were developed to be tied to the effectiveness of the product: when a pilot can no longer see the line, then it is no longer effective. [2]

BlazeTamer 380® is a polymeric-elastomer-based water enhancer designed for deployment by aircraft to suppress wildfires. It contains a mix of polymers, surfactants, water, and other ingredients, and is uncolored. BlazeTamer 380® is a liquid concentrate that weighs approximately the same as water. The mixing ratio is .65% concentrate for each gallon mixed. This product will be loaded at the State-managed Northern Colorado SEAT base.[3]

Thermo-Gel 200L® is a hydrophilic polymer based in mineral oil and contains a blue colorant. It is packaged in a liquid concentrate form that, when added to water, transforms into a heat-absorbing gel. The water-filled gel particles adhere directly to the burning material and, in doing so, aid in the quick extinguishment of fire. It has a mixing rate between .5% and 3% of each gallon mixed. [4]

SEATs loaded with water enhancers will respond to fires on State and private land, as well as to fires under the jurisdiction of BLM, the National Park Service, and USFS. Mixing will be at the recommended ratios in the USFS Qualified Products List for each product on all drops. For operational planning and awareness purposes, State-contracted or BLM-contracted SEATs flying from one of the three bases will be loaded with the aerial suppressants specified above on the first load, unless the ordering unit clearly indicates that LTR is needed instead. Any additional loads (i.e., LTR, water enhancer, or water) will be at the discretion of the Incident Commander.

An Interagency Information Bulletin was prepared and has been issued to provide increased awareness and information about the study to all impacted agencies.

The use and effectiveness of these products will be evaluated by ground firefighters, SEAT Base Managers and/or SEAT Managers, and the aerial supervision community[5] through robust data collection forms. In addition, the CoE has two personnel who are performing field data collection in 2019.

Ground firefighters will be reporting on:

SEAT Base Managers and/or SEAT Managers will be reporting on:

The aerial supervision community and SEAT Pilots will be reporting on:

In addition, SEAT Pilots will record their observations and impressions as to the performance of the water enhancers. When available, the DFPC Multi-Mission Aircraft will also record images and videos before, during, and after drops.

After the 2019 fire season, CoE staff will analyze the information recorded by personnel on the fires and produce a final report on the use and effectiveness of each enhancer with recommendations for future use on fires in Colorado and beyond, including:

Participating agencies hope to achieve the following goals during this project: