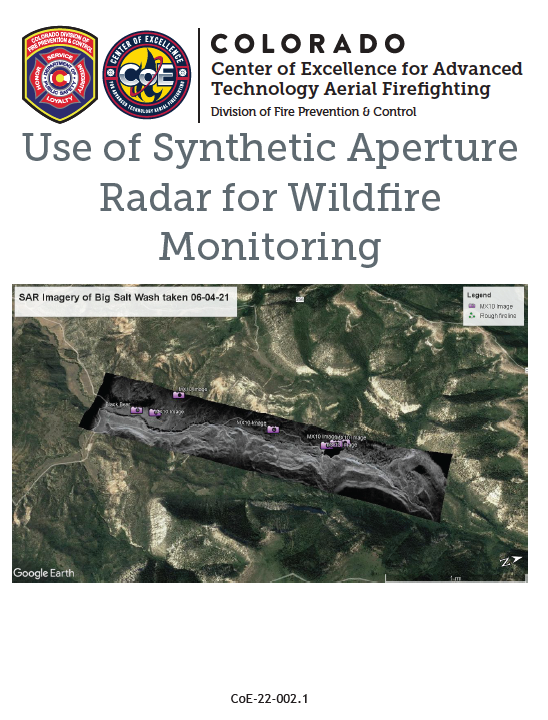 During the Pine Gulch Synthetic Aperture Radar project, the CoE evaluated the use of an airborne synthetic aperture radar (SAR) to detect post-wildfire changes in vegetation, changes to the surface resulting from erosion and depositional responses of the burned watershed in the Big Salt Wash area. Burn area boundary detection was also evaluated. This effort was undertaken to look at how a SAR might be used in support of wildland fire monitoring and for other applications such as detecting subsidence and landslides, flood events, forest health and degradation among others. Changes between flights were detected using Coherence Change Detection (CCD) imagery.

The IMSAR NSP-7 SAR was evaluated to determine the ability of SAR to detect post-fire erosion, soil movement and well-detect burn boundaries following a high intensity wildfire in northwest Colorado. Flights were conducted in the Big Salt Wash area within the Pine Gulch Fire burn scar. The Pine Gulch Fire was a wildfire that burned in Mesa County and Garfield County, Colorado. The fire was started by a lightning strike and first reported on July 31, 2020 and quickly grew and eventually burned 139,000 acres (InciWeb 2021).

Read the CoE "Use of Synthetic Aperture Radar for Wildfire Monitoring" for more information on this investigation and future plans.