Rifle, CO, October 6, 2022-The Center of Excellence for Advanced Technology Aerial Firefighting (CoE), the research and development organization within the Colorado Division of Fire Prevention and Control, has entered into a 5-year, $1.6 million agreement with the USDA Forest Service to develop innovative technologies for wildland fire management. 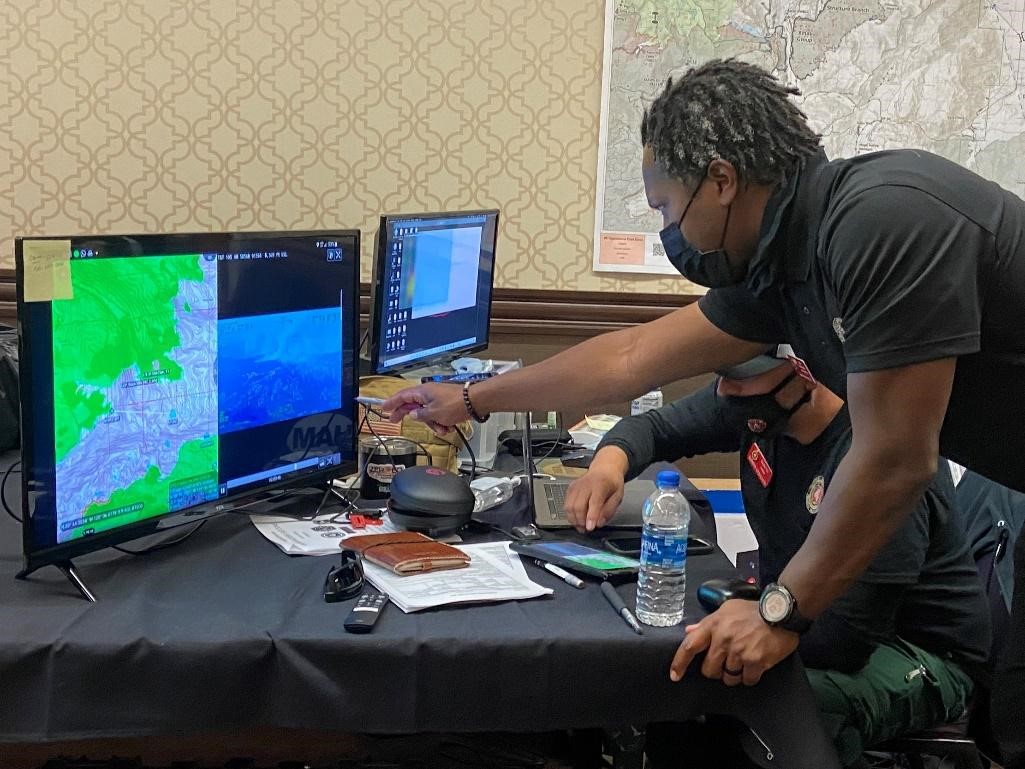 “Wildland fire management is increasingly relying upon technology to support decisions and increase situational awareness,” said CoE Director Ben Miller. “Technology along with the fire environment is rapidly changing and we are excited to partner with the USDA Forest Service to allow for more efficient investment in wildland fire technology both in Colorado and nationwide.”

The CoE will assist the Forest Service’s Fire and Aviation Management Tools and Technology Team with projects including broadening adoption of the Wildland Fire Team Awareness Kit (WFTAK) smartphone apps as well as building out capabilities to support public safety responders and wildland fire fighters.

WFTAK provides up-to-the-second location tracking and mapping capabilities to firefighters, as well as cutting edge connectivity solutions and integrations of sensors and cameras for use by firefighters. These and related projects focus on addressing provisions in the 2019 John D. Dingell, Jr. Conservation, Management and Recreation Act, Sec. 1114 Wildfire Technology Modernization.

According to Sean Triplett, Forest Service Tools & Technology Team Lead, “this collaboration will allow the US Forest Service to operationalize technology quickly to get it into the hands of firefighters. We look forward to this opportunity with CoE and are excited to kick off our agreement.”

The CoE has formally collaborated with the Forest Service since 2020 and has demonstrated technologies at pilot project scale on wildfires in Arizona, California, Colorado, Idaho, and Nevada.

DFPC Public Information Officer: Caley Pruitt | This email address is being protected from spambots. You need JavaScript enabled to view it. | 720-391-1565

Introduction to the Team Awareness Kit

First responders have many options for gaining and maintaining situational awareness at a strategic level when responding to disasters. Computer aided dispatch systems and dashboard-style maps can provide information across a jurisdiction or the entire country on emerging disasters, and are easily accessed when first responders are at their duty station or responding to a disaster in a vehicle. 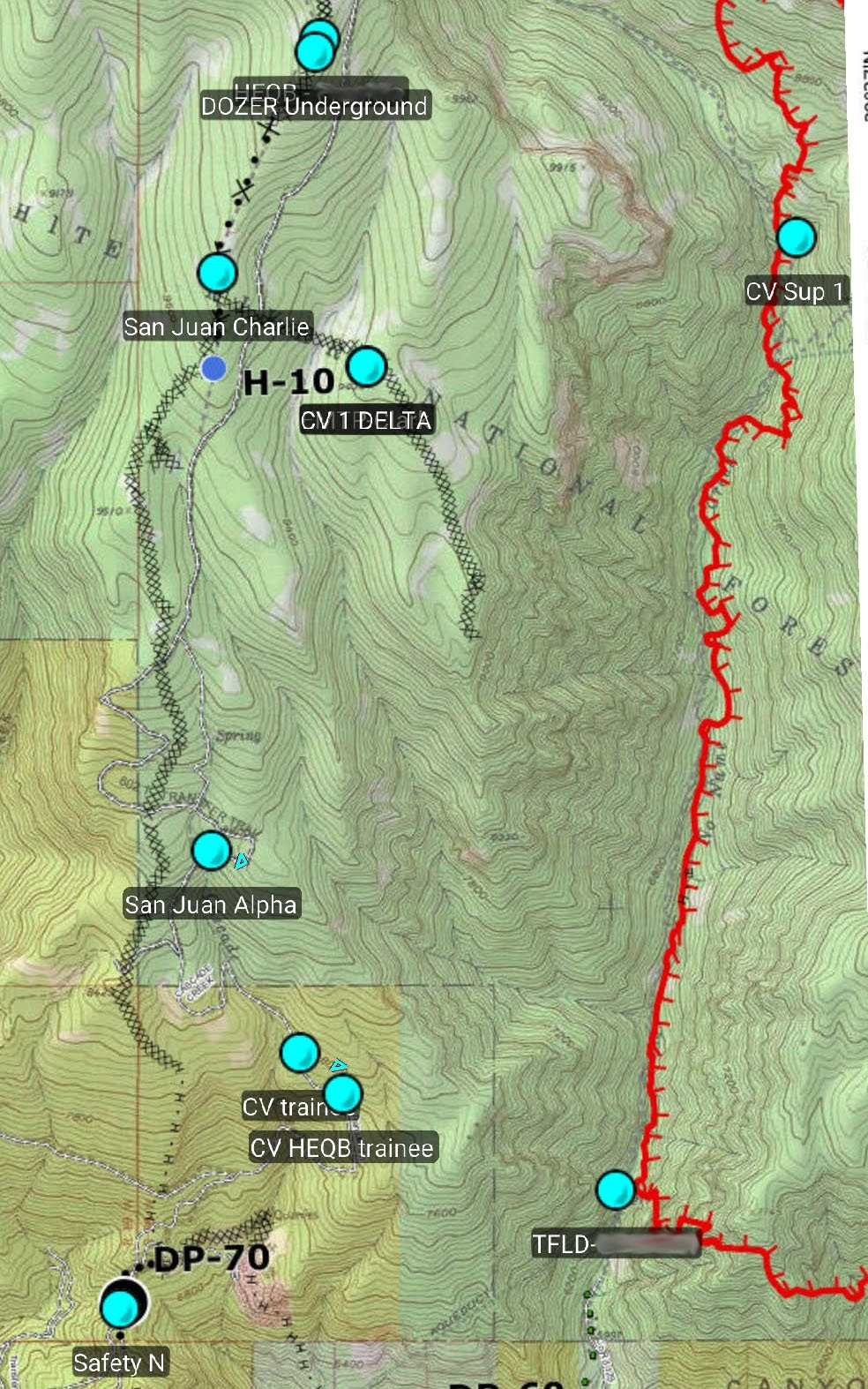 However, when first responders are operationally engaged in disaster response, in other words are "boots on the ground," their options for maintaining situational awareness are far more limited. Typically they rely on voice radios, aka walkie talkies, to exchange information with other first responders. They may have a preplan or topographic map of the disaster area, which on rare occasions will be updated with content related to the ongoing disaster.

To improve the safety and effectiveness of first responders during tactical operations the CoE has worked to facilitate adoption of the Team Awareness Kit (TAK). TAK is a geospatial mapping engine, originally developed for the Android operating system, that facilitates tactical situational awareness, navigation, and data sharing. TAK is under continuous development by the TAK Product Center, a coalition of U.S. Department of Defense programs and other federal agencies. TAK employs a “government off-the-shelf” model, 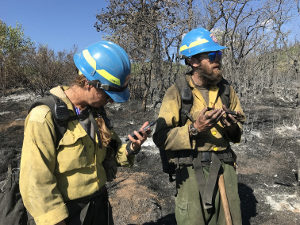 which stipulates that any new features developed for TAK be provided back to the government, thus ensuring that all government TAK users have free access to the software. TAK-Civ, a demilitarized version of TAK, has been open sourced by the TAK Product Center and can be freely downloaded for Android and iOS devices.

While the Android version of TAK, known as ATAK, is the most mature version of TAK, apps also exist for viewing the TAK common operating picture via Windows (WinTAK), iOS (iTAK), virtual reality (VTAK) and the web (webTAK). Several of these TAK programs include plugin architectures which allow developers to add additional features and capabilities by authoring a plugin, rather than modifying code in the base application. Several plugins are pertinent to first responders—such as plugins that integrate radio systems, allowing the app to function in areas that lack cellular service, and plugins that synchronize official geospatial data regarding disasters across all TAK devices.

The CoE utilizes TAK with a cloud-based server when Internet connectivity is available and is evaluating commercially available radios and deployable networks that enable the TAK app to function without a full Internet connection. When disconnected from the Internet, TAK can either transmit basic data (such as position reports) directly between radios, or utilize a small server physically deployed at the incident to relay maps and more complex data.

The CoE has deployed TAK at public safety incidents in Colorado since 2018, as well as with Colorado Division of Fire Prevention and Control fire crews, to gain an operational perspective on the system.

In 2020 the Team Awareness Kit was awarded as part of the "Best of What's New" from Popular Science for its use in disaster response by the CoE and other agencies, and its open sourcing by the TAK Product Center. The CoE will continue to foster development and deployment of TAK through collaboration with military and civilian TAK stakeholders and partner public safety agencies.

In 2020 the U.S. Forest Service awarded a grant to the CoE to develop a TAK capability for wildland fire and conduct a pilot project deployment of the technology on a wildland fire. The CoE stood up a TAK server that ties all TAK users together and integrated this server with the Enterprise Geospatial Portal, a federally developed website containing fire maps and other intelligence.

An opportunity to pilot TAK came in August 2020 on the Grizzly Creek Fire in Western Colorado. The CoE coordinated with the fire’s incident management team to deploy TAK to firefighters on the night shift, as well as on a division (a discrete geographic area) of the fire. A total of 28 phones were deployed with firefighters for 13 days. On average, firefighters’ positions were updated every 129 seconds. In addition, wildland firefighters participating in the pilot project received regular updates of incident maps and information on their phones through the TAK app. All firefighters surveyed on the deployment stated that TAK improved their situational awareness. Read the full report here:

Video summary of the 2020 TAK deployment on the Grizzly Creek Fire:

Tour of TAK location reports on Division N of the Grizzly Creek Fire:

Video summary of a TAK deployment in 2019 for night aerial firefighting with the DFPC Canon City Helitack crew:

Video on 2018 TAK deployments at Country Jam and the Telluride Bluegrass Festival:

TAK features a plugin architecture, which allows developers to add functions and integrate other systems with TAK by writing a software plugin, rather than rewriting the whole TAK app. This flexible approach also allows TAK users to load only the plugins that they are interested in, while maintaining interoperability with other TAK users for core functions such as location tracking and chat.

One TAK plugin utilized by the CoE is the UAS Tool, which integrates small UAS into the TAK common operating picture.

Data on the elevation of terrain can be loaded into the TAK apps, and can be used to calculate the elevation of points or the gain/loss incurred while travelling along a line or route. TAK also can display a heatmap of elevation, with low areas colored blue and high areas colored red. The CoE built on this heatmap tool by creating a low-tech sand table consisting of a sandbox and wide-angle projector. The projector is connected to a phone running ATAK or computer running WinTAK, and using the heatmap tool the sand terrain is reshaped to match the area viewed in TAK. This sand table can assist first responders in gauging the terrain as they use TAK to train or plan a mission, and can display a mission in real-time for improved situational awareness by incident managers.